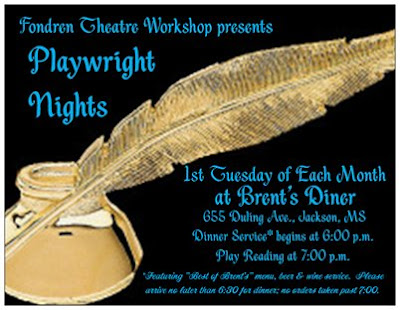 **NOTE: WE ARE TAKING OFF FOR THE MONTH OF DECEMBER...WE'LL SEE YOU IN 2013!**
Welty, Williams, Faulkner...the next Mississippi treasure may be among us.Please join Fondren Theatre Workshop at Brent's Diner on the first Tuesday of each month for Playwright Night, when we will feature public readings of new theatrical works by local writers, presented in a Reader's Theatre format, followed by a feedback session with the playwright, all served alongside the best burgers & shakes in town!

Dinner service begins at 6:00 p.m.; play readings at 7:00 p.m. Featuring a "Best of Brent's" menu, as well as beer and wine service. If you plan to eat at Brent's, please arrive no later than 6:30 p.m., as no new orders will be taken after the play readings begin.Admission is free; food and beverage at menu prices.

For more information regarding upcoming schedules or to submit works for consideration, email: fondrentheatre@hotmail.com, visit www.facebook.com/fondrentheatreworkshop, or call 601-301-ACT1 (2281).


NEXT UP:
FEBRUARY 5, 2013 - "Finding Laurel" by Chris Moore
We're thrilled to start off 2013 with this MS Theatre Association 2013 Best New Play Award-winner!  A native of Jackson, Chris Moore has appeared in recent FTW productions of "Assassins" (Hinkley) and "The Rocky Horror Show" (Brad).  A recent graduate of the University of North Carolina School of Filmaking, Chris has had two of his films featured in the Crossroads Film Festival. He's also made several films with his production companies, Macabre Films and Schmoore Filmworks, including "Perversion," "Lock In," "Here's to the Ladies Who Munch," "The American Dream," and "No Offense, But You're Fugly."  He is currently working on other various projects, including a full-length play, "Chasing Rainbows," inspired by his favorite show of all time, "Gypsy."

Stonewall Lane was born in St. Louis, Missouri, served in Vietnam, and after 33 years retired from state service in Connecticut. He earned his B.S. in Human Services from New Hampshire College and his Masters degree in Marriage and Family Therapy (MFT) from Southern Connecticut State University. Upon his retirement, Stonewall relocated to Jackson, Mississippi in 2006 where he now resides, exploring the regional history and culture that seeded his DNA. He spends his spare time writing, volunteering for the New Stage Theatre, and making amends for a multitude of sins and shortcomings.


OCTOBER 2, 2012 - "Portrait of a Woman" by Katrina Byrd
A self-proclaimed Boa Flouncer and Hair Whipper, Katrina Byrd tells her stories on stage, in the classroom, and on paper.  "Portrait of a Woman" is a collection of diverse genre writings centered on the female experience. According to Katrina, "I like to write stories about real women, confronted with real life situations."

Katrina is a graduate of Millsaps College with a BA in History. She has written several short plays that have been seen locally (including several for FTW's Ten-Minute Play events), and was the Playwright in Residence for The Center Players for the 2010-2011 season, culminating in the production of her short play, "Dinsmoor's Last Stand."  She has received minigrants from the MS Arts Commission, and was added to MAC's roster of teaching and performing artists in July 2012.  She has had short stories published in Black Magnolia literary magazine, and has self-published three books, Byrds of a Feather, One Hot Minute, and Justice is Blind. As prolific a writer as she is, Katrina is also a gifted performer, having appeared in productions of "Hats" (Center Players), "The Rocky Horror Show (FTW), and "Leading Ladies" (FTW).


SEPTEMBER 4, 2012 - Three Short Works by Judy Tucker
Including something serious: "A Family's Story"; something sweet: "The Owl & The Pussycat"; and something silly: "The Morninng Show"-- but all of which are equally entertaining!

Judy Tucker is a native Mississippian, playwright, author, and independent editor in Jackson. Her plays have been produced and/or workshopped by New Stage Theatre, Alabama Shakespeare Festival, Fondren Theatre Workshop, and Brick Street Players, who produced her most recent full-length work, The Watch They Keep, in 2010. She received a Literary Arts Fellowship in play writing from the MS Arts Council in 2008. She and her co-editor, Charlene McCord, have produced a very successful series of collected works by Southern writers, including Christmas Stories from Mississippi, Christmas in the South, A Very Southern Christmas, A Dixie Christmas, Christmas Memories from Mississippi, and Growing Up in Mississippi.

AUGUST 7, 2012 - Three Short Works by Julie Whitehead
Including  "Ave Maria," "Freedom to Breathe," and "One More Time from the Sandbox," each of which examines characters in moments of crisis, and how they help each other cope.

Julie Whitehead is a native Mississippian, and  a graduate of MS State University with a B.A. in Communications and an M.A. in English.  A successful freelance writer for ten years, Julie won a first-place award from the Mississippi Press Association for her work in 2006. She now teaches Composition at Hinds Community College, Rankin Campus.  Her first play, "Hurricane Baby," was a top-three finalist in the 2010 Eudora Welty New Play Series at New Stage Theatre.

JUNE 5, 2012 - "Open Mic" by Bret Kenyon
Winner of the MS Theatre Association 2012 Playwriting Competition, "Open Mic" asks the question: "Did the Class of 1998's 'Most Likely to Succeed' really succeed? Or was he a failure like the rest of us?"  Mixing comedy, drama, and a few nice musical interludes, the play turns Red's Bar into a courtroom and its patrons into lawyers, judge, and jury... with an overdue bar tab as the stakes.   (Contains adult language and subject matter.)

Bret Kenyon, a native of Pittsburgh, PA, graduated from Belhaven University in Theatre, and has called Jackson his home since 2003.  He is a published author, screenwriter, and cinephile, and has been active as an actor, director, and playwright in several local theatres, including Belhaven University, Fondren Theatre Workshop, The Center Players, Actor's Playhouse, and, most recently, New Stage Theatre, where he played a lead role in "All My Sons." He currently is employed by WJTV as Outreach Coordinator.

APRIL 3, 2012 - Four Short Works by Joseph Frost
Joseph Frost is Chair and Associate Professor of the Theatre Department at Belhaven University. Works to be read will include "RETURN," an MTA playwriting competition finalist, as well as two works from a cycle of ten plays being co-written by Joe and several Belhaven students in a collaborat...ive effort with an English language program in Ghizhu, China, which will be performed by students there in May. Based upon the poem "Phoenix Hairpin," the two plays to be read are "Peach Blossoms Fall" and "East Wind Unfair." The fourth work will be, as Joe puts it, "a surprise."

MARCH 6, 2012 - "Buck-Nekkid," a full-length comedy written by John Maxwell, who most of our Jackson community will recognize from his world-famous one-man show, "Oh, Mr. Faulkner, Do You Write?" Although earlier versions of "Buck-Nekkid" have been produced regionally, this is a newly-updated script, including a new character. According to Mr. Maxwell, "The play has a deep religious theme...I got the idea from the characters themselves. I know that sounds strange, but I found the voices, and they dictated the plot." ADVISORY: THIS PLAY CONTAINS MATURE LANGUAGE AND SUBJECT MATTER.

FEBRUARY 7, 2012 - "Scrambled," by Beth Kander, winner of the 2012  Southeastern Theatre Conference Getchell award for best new play. This will be the Jackson premiere of this new work, so you won't want to miss it!
Posted by Fondren Theatre Workshop at 12:17 PM 15 comments:

LET’S DO THE TIME WARP AGAIN! 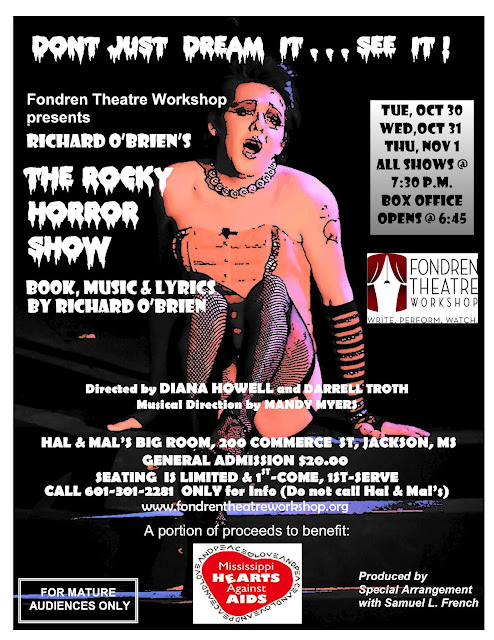 Reprising three prior very successful runs of this show in 2006, 2008, and 2010, we'll again be donating 20% of all net proceeds of this year’s production to MS HeARTS Against AIDS.Performance dates are Tuesday, Wednesday, and Thursday, Oct. 30, 31, and November 1, at 7:30 p.m. Tickets are all $20.00 General Admission. The show contains some mature themes and language. The show will be directed by FTW co-founder Diana Howell, with assistance from Darrell Troth and musical direction by Mandy Myers. Many favorites from the original cast will be returning, including Chad King as Dr. Frank-n-furter, Michael Kinslow as Rocky, Kaeley Lovett as Columbia, Richard Lawrence as Dr. Scott, and Sydney Blackwell as Janet. Rounding out the principal cast are Kendall Kinchen as Magenta, Chris Moore as Brad, Clif Hogan as Eddie, Kyle Henderson as Riff Raff, and James Wood as The Narrator. Box office opens at 6:45; seating is limited and first-come, first-serve, so early arrival is strongly encouraged. For further information, call 601-301-2281, or check for updates on our Facebook page!
Posted by Fondren Theatre Workshop at 11:43 AM No comments:

Can You Kick In For Our Kickstarter?

John Maxwell's bawdy but spiritually inspired comedy, "Buck Nekkid for Jesus," tells the tale of Billy Boston, the bedraggled owner of a failing gas station in Moon Mountain, MS, who is confronted by Sister Pearl, a traveling faith healer who's hell-bent on saving his soul via some VERY unorthodox methods. ADVISORY: THIS PLAY CONTAINS MATURE LANGUAGE AND SUBJECT MATTER.
The play is directed by Denise Halbach, and the cast includes Keri Grayson Horn, Richard Lawrence, Dylan Lovett, Chris Roebuck, and Jo Ann Robinson as Sister Pearl.
Maxwell began work on "Buck Nekkid" in 1989, and while earlier versions of the script have been produced regionally, this is a newly-updated script, including a new character.
According to Maxwell, even though the play is a comedy containing a considerable amount of mature language and subject matter, "the play has a deep religious theme. I got the idea from the characters themselves. I know that sounds strange, but I found the voices, and they dictated the plot." Maxwell hopes this production will be a launching pad for publication of this finalized version of the play.
FTW is pleased to be "returning home" to Duling Hall, as it staged its first two productions there: an original musical adaptation of "Through the Looking Glass" by FTW co-founder John Howell, and "The Lion in Winter," in 2003 at the then un-renovated Duling Attendance Center auditorium. Since that time, developers have transformed the old Jackson Public School building into a multi-purpose retail/restaurant/special events facility with a state-of-the-art performance space.
Due to the production demands of this show, FTW has launched a Kickstarter project to raise funds to cover facility rental and set construction expenses.PLEASE HELP MAKE FTW'S PRODUCTION OF "BUCK NEKKID FOR JESUS" POSSIBLE! THANK YOU!
Direct Kickstarter link: http://www.kickstarter.com/projects/1072438440/buck-nekkid-for-jesus-by-john-maxwell-presented-by
Posted by Beth at 11:55 AM 1 comment:

LOOK BEFORE YOU LEAP: THE TEN-MINUTE PLAY PROJECT REBOUNDS! 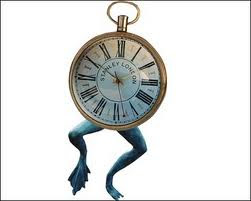 CALLING ALL WRITERS, DIRECTORS, AND ACTORS!

YOU HAVE ONLY ONE NIGHT TO WRITE IT;

YOU HAVE ONLY ONE DAY TO REHEARSE IT;

AND THEN ONLY ONE CHANCE TO PERFORM IT!

After a two-year hiatus, the event you've been clamoring for is back! FTW is hosting its 5th TEN-MINUTE PLAY PROJECT. Teams of writers/directors/actors will gather on Friday evening, February 10, and will spend just under 24 hours writing and rehearsing several ten-minute plays for production on Saturday night, February 11. If you are at least 16 years old and are interested in participating, YOU MUST PRE-REGISTER NO LATER THAN FEBRUARY 6, 2012, by sending an email request to Diana Howell at howelljd@aol.com. Please include your name, telephone number(s), and your preferred method of participation, i.e., writing, directing, or acting. We only have room for 6 writers, so writing & directing assignments will be made first-come, first-serve. Diana will reply with a confirmation and registration materials. THERE IS A SMALL REGISTRATION FEE OF $8.00 PER PARTICIPANT to help cover materials and refreshments, which will be payable at our initial cast meeting on Friday, February 10.

This event is open to anyone with an interest in theatre--regardless of prior experience.
SO LOOK NO FURTHER--JUST MAKE THE LEAP & COME PLAY WITH US!!!!!

FONDREN THEATRE WORKSHOP is a 501(c)3 organization dedicated to creating a true theatre community, with an emphasis on sharing the creative process, as well as the art we create. http://www.facebook.com/#!/events/251581141581229/
Posted by Fondren Theatre Workshop at 8:14 AM No comments: