The Little Show That Could

Everyone should come see Every Christmas Story Ever Told (And Then Some!) while you still have the chance. Our holiday show this year is truly The Little Show That Could. And to make our holidays warmer, we need YOU to come see it brought to life.

We're not quite halfway through the run now. We've promoting the show everywhere, from Facebook to WLBT to e-mail blasts to shiny postcards to WLEZ and even on YouTube. (Okay, so we're late on our site here, but as you can see - we've been busy. And did we mention that a lot of our board is directly involved with this little holiday gem?)

Our first night, we had an awesome but small house. Last night, we were PACKED and the audience had more fun than is probably legal here in the great state of Mississippi. We're almost sold out for Sunday, but today, Saturday, we have TWO shows and not many reservations. Please, please spread the word and plan to attend:

And remember, your $12 ticket gets you the show, free cookies and cider, AND the chance to see a giant blow-up nutcracker... among other things! So come see the show. Otherwise, the actors will suffer from DAS, and it will be your fault. :( What is DAS, you ask? Well... remember those YouTube videos we mentioned? Here is one of them, a PSA that speaks to this important theatrical issue:

Thank you. And happy holidays!
Posted by Beth at 7:54 AM No comments: 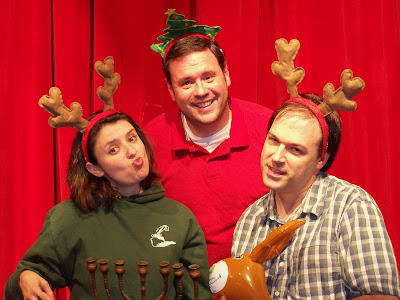 Can't handle seeing "A Christmas Carol" one more time? Here's the antidote (or in the case of this year, the "Annie"-dote!)

FTW presents the Jackson premiere of the holiday seasonal comedy EVERY CHRISTMAS STORY EVER TOLD (AND THEN SOME) by Michael Carleton, James FitzGerald, and John K. Alvarez. Directed by Richard Lawrence, the show packs every beloved holiday tale and tradition you can think of into a physically dexterous comedic romp for three actors, including FTW veterans John Howell and Beth Kander, along with newcomer Scott Stinson. Audiences will get Cliff's Notes versions of multiple classics, including "The Grinch," "Frosty the Snowman," "Charlie Brown," and a non-trademark infringing rendition of "Gustav, the Green-Nosed Reingoat," while characters from "It's a Wonderful Life," stumble in and out of "A Christmas Carol." The show ends with a frenzy of caroling that attempts to stuff every known holiday jingle into a two-minute mashup.

From Hanukah to Whoville, and sharp satire to silly slapstick, this family-friendly frolic has something for the naughty and the nice! So grab Tiny Tim, shout "Bah, humbug!" and enjoy this hilarious tour-de-farce that will have you laughing harder than spiked eggnog!

Performances will be December 8-11 (Thursday-Sunday) at 7:30 p.m. nightly, with a Saturday matinee at 2:30 p.m., at The Warehouse Theatre (formerly Childrens Community Theatre building), 1000 Monroe St., Jackson, MS. All tickets are $12.00. Seating is limited, so reservations (with Visa/MC) are encouraged. Please call FTW at 601-301-2281 to reserve tickets or for more information.

Produced by special arrangement with Playscripts, Inc. (www.playscripts.com). This show is made possible in part by the generous support of New Stage Theatre.

Posted by Fondren Theatre Workshop at 5:42 PM No comments: 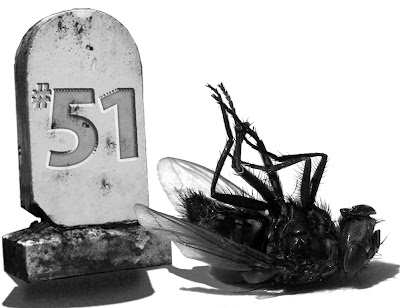 What Are Audiences Saying About FTW's "ASSASSINS"?

Tonight is the final performance of FTW's production of "Assassins," and you don't want to miss it - but don't take OUR word for it. Here's what audience members are saying about the show:


"I just witnessed one of the best pieces of theatre I have seen in many years - ASSASSINS. Stellar performances, beautifully directed, fabulous design and tech. DON'T MISS IT!" - Denise Halbach, Past President, Southeastern Theatre Conference 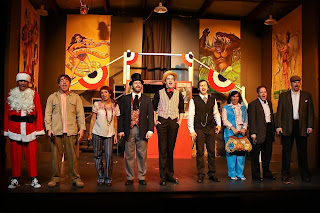 "Dear anyone reading this.....PLEASE go see this show. It is incredible. Everyone in it is amazing. Thank you FTW for doing this show. I'm a huge fan of anything Sondheim....but this was THE ONE that I've never had a chance to see. I was beyond impressed." - Kristy Asken

"The depth and range of the talent of Fondren Theatre Workshop is amazing.....congratulations on an awesome production." - David Kweller

"Assassins is the most intriguing show you will see all year. The acting is so superb and the vocals are clear and thoroughly entertaining. The cast (and I'm a fan of each and every one of them) has outdone themselves. If you're not laughing the hair on the back of your neck is standing up. Wonderful performance!!" - Janice Weaver, Actress, Theater teacher, Mississippi Theatre Association Board Member

"ASSASSINS is a great show ...I cannot remember shorter two hours in a theatre. Amazing cast, first class singing, some of the best performances I've seen in a long time and as Stacy pointed out, it will make you think, and the Malaika - Beth scenes will keep you in stitches at appropriate times while others will forget you to breathe. Great inside look into the mind of presidential assassins." - Peter Zapletal, Director, Puppet Arts Theatre

"Go see this show! Talented cast and crew! It will make you think and entertain you at the same time." Stacy Walker, Actor/Director, Actor's Playhouse

What are you waiting for? Help us sell out our final night! Support theater in Jackson! COME SEE ASSASSINS! Last show is tonight, Sunday, August 14, at 7:30 pm - Warehouse Theater, corner of Monroe and Moody streets in Belhaven Heights neighborhood, Jackson, MS! 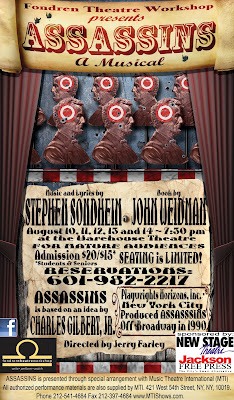 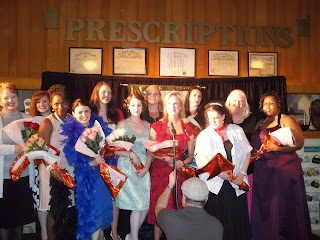 Thanks to everyone who supported LEADING LADIES! The benefit was a great success for Contact the Crisis Line, a wonderful partnership with the historic Brent's Drugs in Fondren, and a delight for everyone who came out to enjoy these two nights of nostalgia. Bringing the community together for a great cause and some great performances is at the heart and soul of FTW's mission.
Stay tuned for what's next with FTW: Stephen Sondheim's "ASSASSINS"!
Posted by Fondren Theatre Workshop at 6:19 PM No comments: